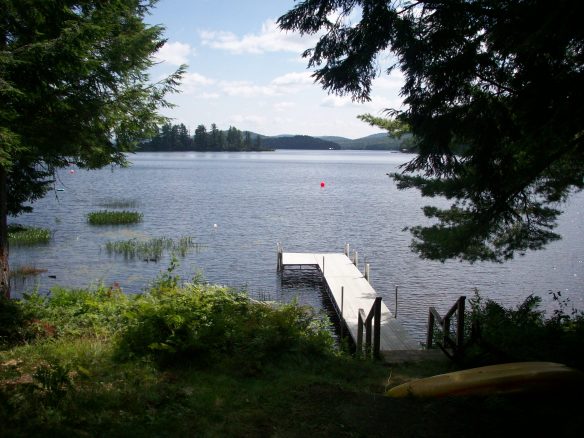 Standing near the Dock at the Lake (Big Moose Lake)

From August 1-8, I was on vacation in the Adirondacks in Upstate New York, staying at Vicky’s family’s “camp” (a.k.a., cottage) at Big Moose Lake. The camp was given to her grandfather (an attorney from Albany) for helping recover money lost by some inn-owning sisters. Big Moose Lake had also been the site of a notorious murder, in which a young man used the remote location to kill the young woman he had gotten pregnant. The story was transformed by Theodore Dreiser in his novel: An American Tragedy (1925) and then also further transformed (and re-set in California) in the classic Hollywood movie: A Place in the Sun (1951). 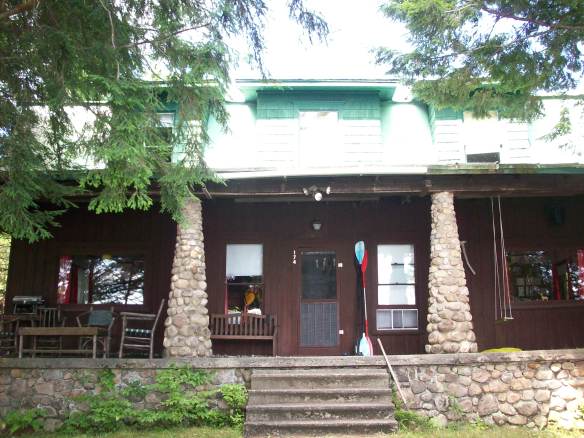 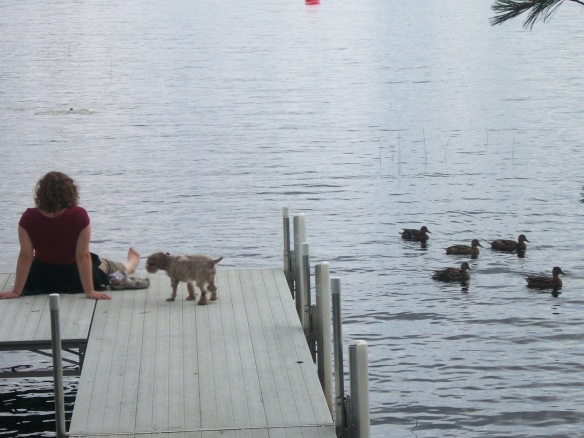 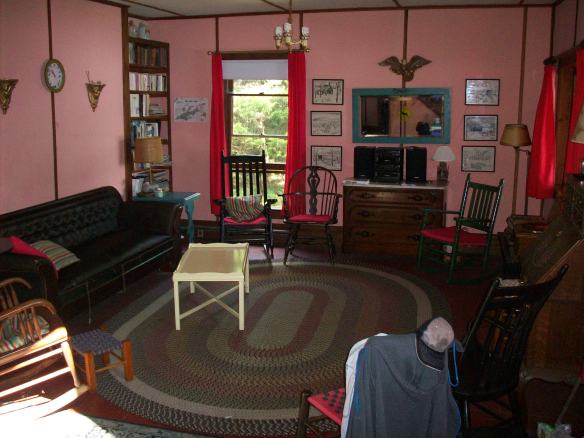 the living room, including a library, a stereo (mostly featuring a CD of “bear songs” for kids!, although NPR and a few other radio stations did come in), and an old Victrola 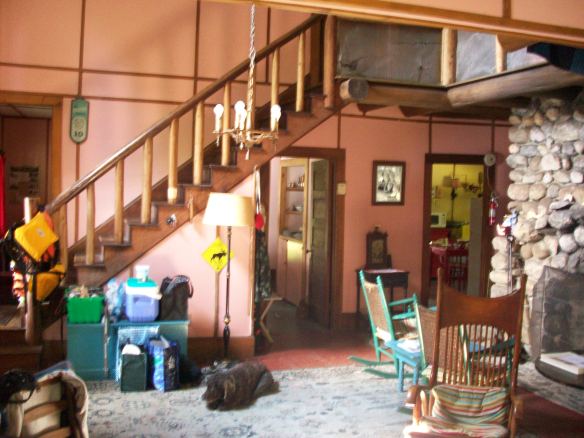 the front foyer, staircase to the upstairs bedrooms/bathrooms, Baylor (Vicky’s Irish Water Spaniel), and fireplace, with doorways to the dining room and kitchen in the background

We thought we’d be roughing it, because a tree had landed on the roof and cut out the power a few months earlier. However, the electricity had been back for a few weeks by the time we got there and was more properly repaired on one of the days we were there. On the other hand, there’s no cell phone service in the area (but there is a land line), limited internet access (sporadically from a nearby inn or by parking near the local fire station), and no TV (although some camps do have satellite dishes). 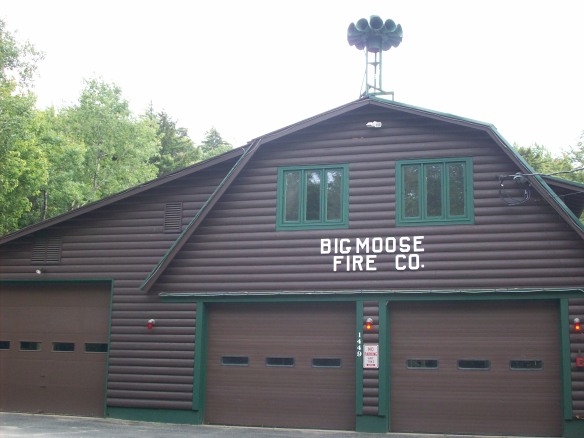 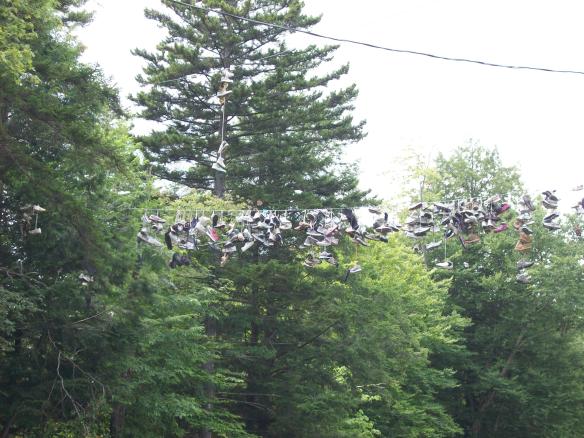 shoes hanging on wire, right beside the fire station (yes, that IS weird!)

The best option for internet, etc. is the nearby town of Inlet (a 20-minute drive), which has a public library, an excellent ice cream shop (Northern Lights), and other nice stores and a great restaurant (the Screamen Eagle). The next nearest town is Old Forge (about a 30-minute drive), and it is quite a bit larger. 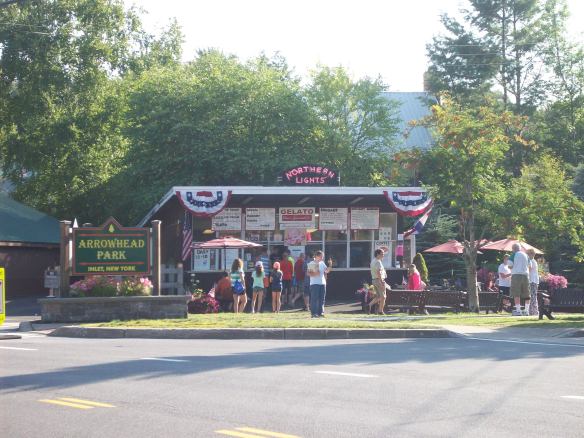 I missed out on a fairly major hike on August 4 (Chimney Mountain), because I was trying to get over this swollen-gland and sore-throat thing and also had plantar fasciitis in my left foot. So, I hung out with Vicky’s two dogs, took some pictures, listened to a bit of NPR, and rested a lot. I also started reading this book I’ve been meaning to get through, as well as the Sunday, August 3 newspaper from Utica, brought by some additional family friends visiting from there. 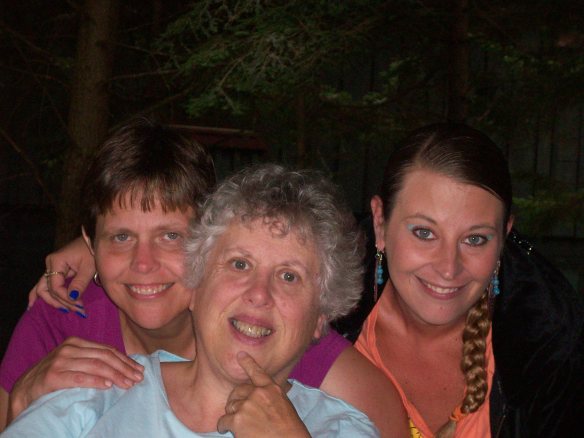 Vicky, with Jeannine and Tara (friends from Utica), August 3 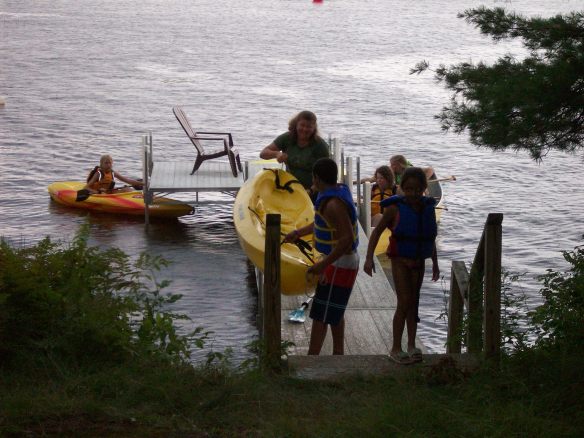 much of the gang, including some of our Utica area visitors, August 3

When the others were around, I went to a craft sale at the Big Moose Community Chapel, helped with meal preps and cleanup, occasionally swam a bit (and/or floated on this plastic, inflatable island thingie), and so on. 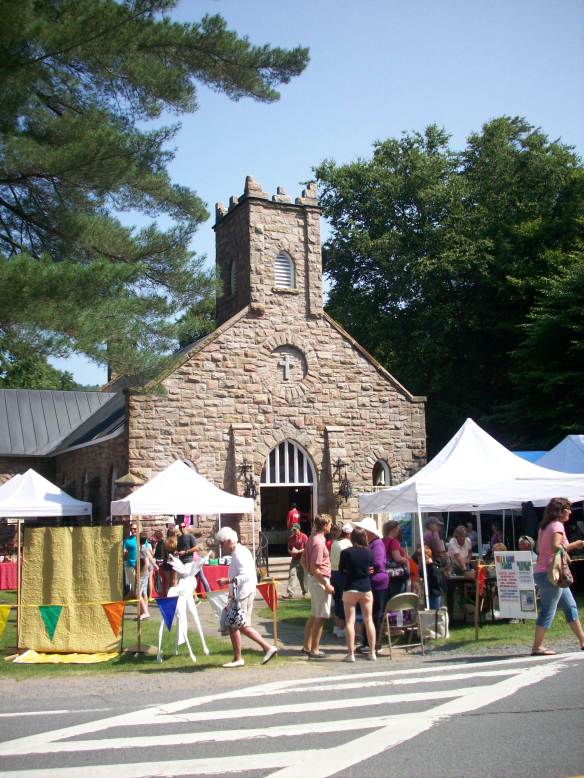 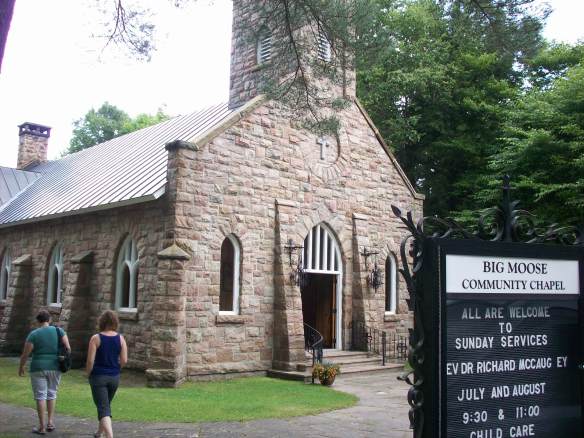 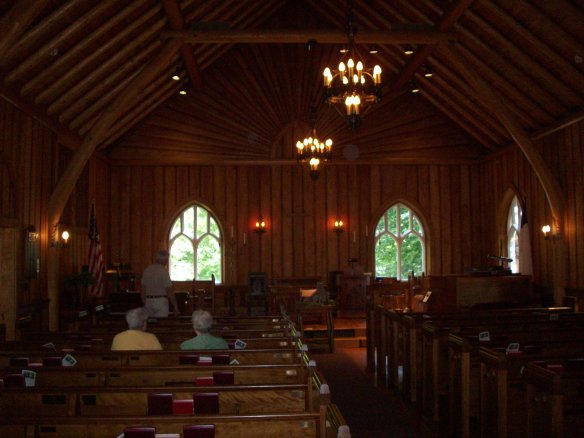 We got some nice photos behind the chapel and down by their dock. 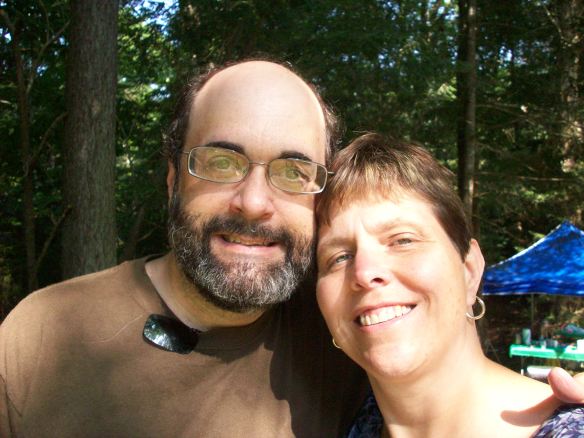 with Vicky, the Queen of the two-person selfie! 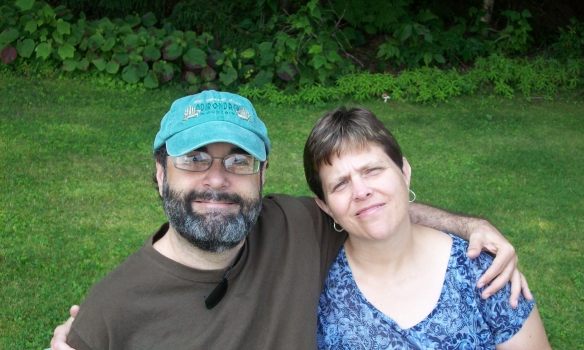 With Vicky near the dock at the Community Chapel on their craft sale day; I had just purchased that hat, in addition to a balsam-fir-scented decorative pillow; August 2

the Pyle’s big dog Miko (about to go kayaking?)

From mid-day August 5 until August 8, it was mostly down to three of us (Vicky, Emma, and me), except for a visit by Jeannine and her husband Charlie on August 7. On August 6, I joined Vicky and Emma for the hike up Bald Mountain. 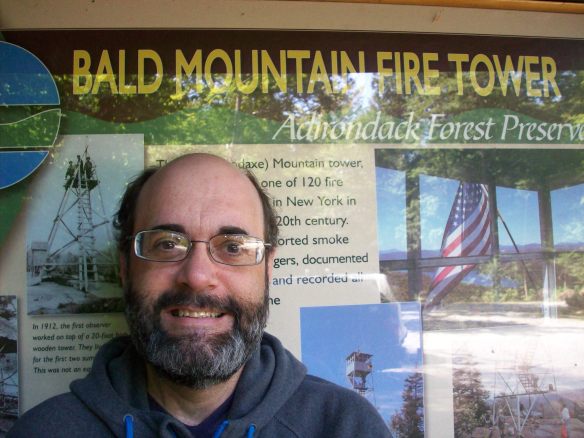 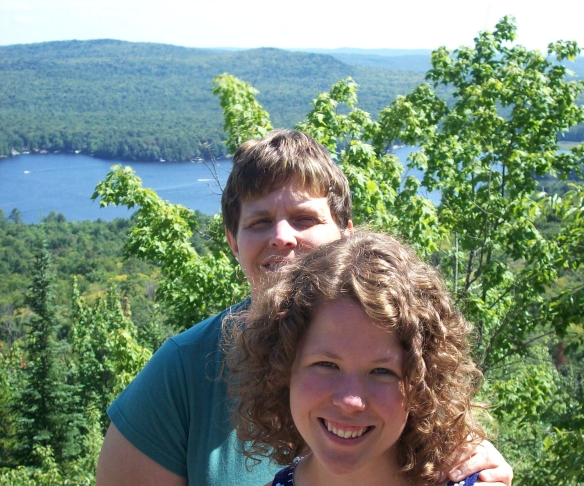 Vicky and Emma, halfway up Bald Mountain; this is the spot where they met Jeannine some years earlier 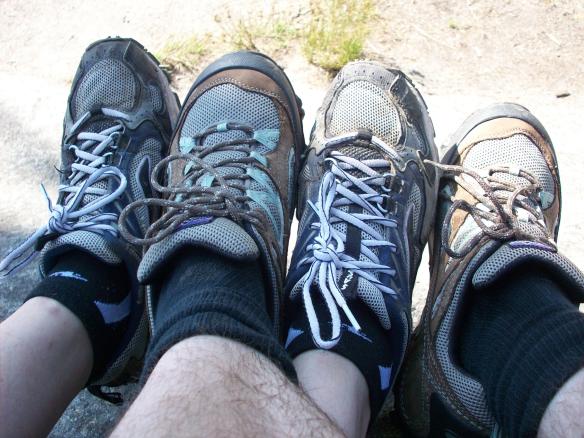 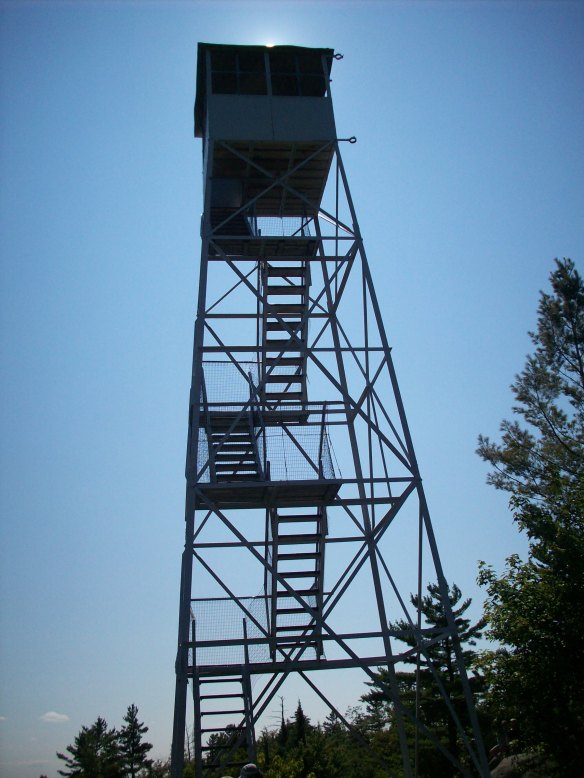 the fire tower at the top of Bald Mountain 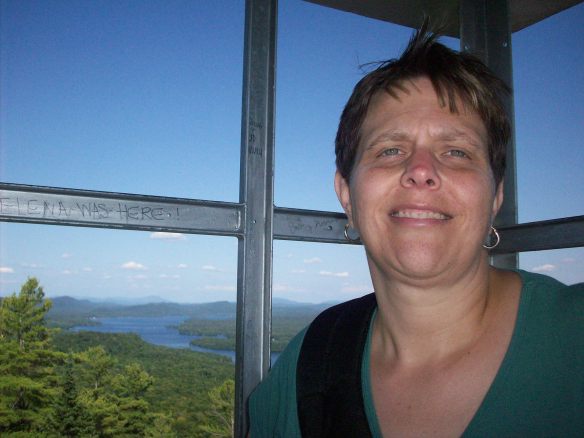 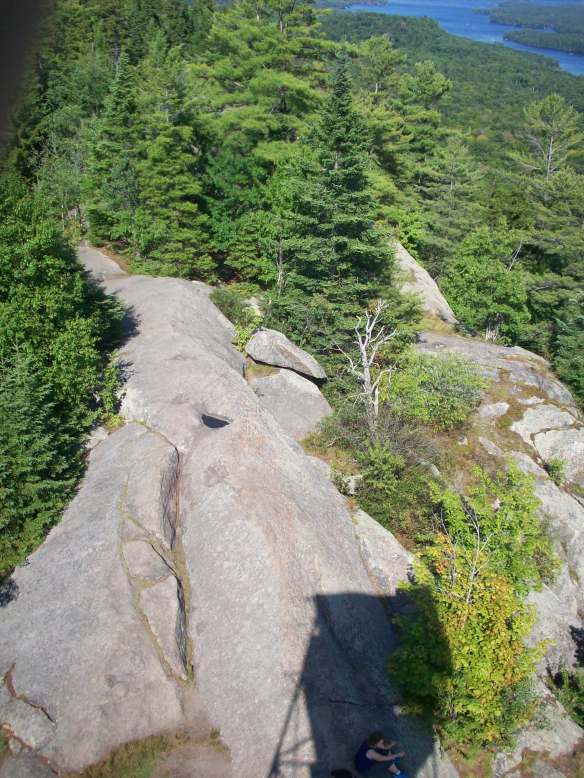 from the fire tower at the top of Bald Mountain 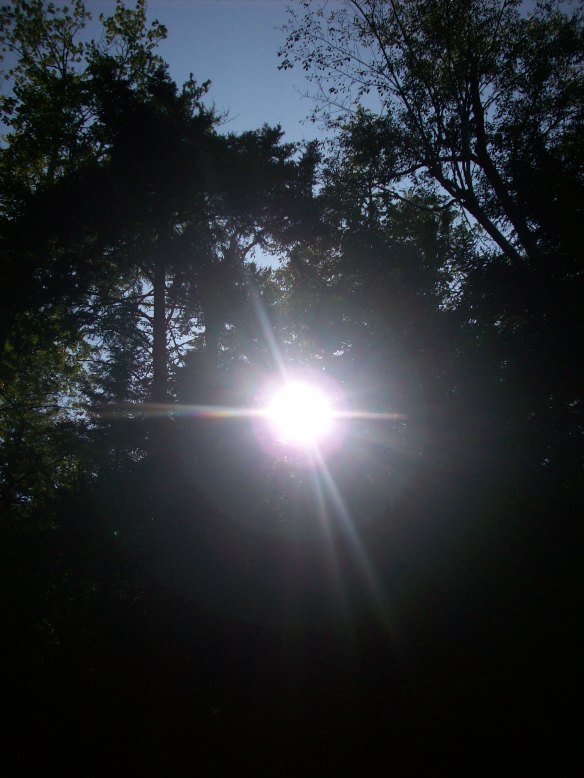 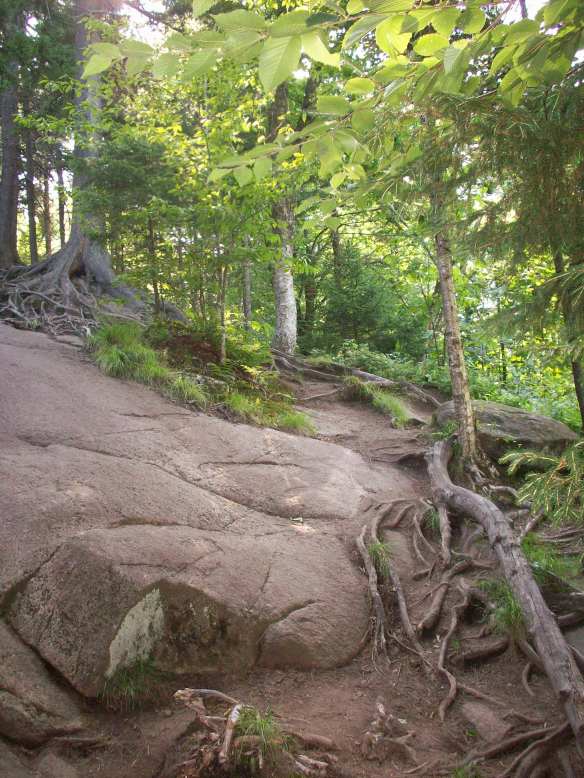 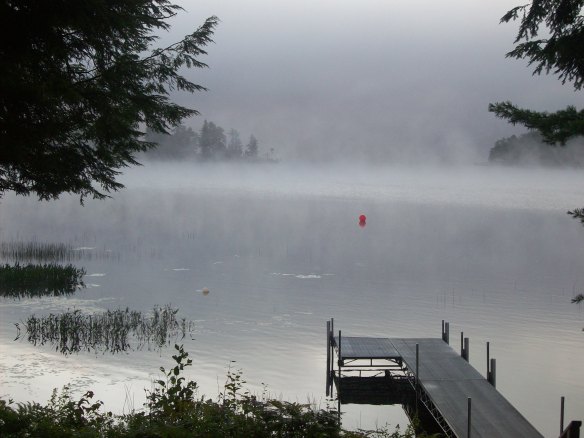