I attended the Ontario Library Association’s 2018 Super Conference in Toronto late last week. It was my first conference as a newly-minted MLIS, and I wasn’t sure whether I’d know what to do or whether I’d fit in. The event has hundreds of sessions and hosts about 4500 delegates, but I’m not very good at schmoozing. However, I did meet and talk with some people, including a fellow author (mainly of children’s books about hockey), a colleague of an old friend, and a career centre counsellor. I also ran into lots of people associated with the MLIS program at Western University (London, ON)–and even a few I knew from elsewhere. In addition, I collected up the names of certain people to contact later.

I learned about things at some of the sessions (including poster sessions), such as newer aspects of RDA cataloguing, useful interactive/online learning tools, and a major linked data project. Other sessions,  though, covered things I already knew about, such Gold Open Access, universities walking away from publisher “big deals,” basic document accessibility principles, and early career advice. I mainly attended sessions having to do with academic libraries.

The keynote talks I attended by Jesse Wente and Naomi Klein involved more general, library-adjacent, thought-provoking cultural issues of storytelling and community-building. An artist created large posters of those talks as they took place! 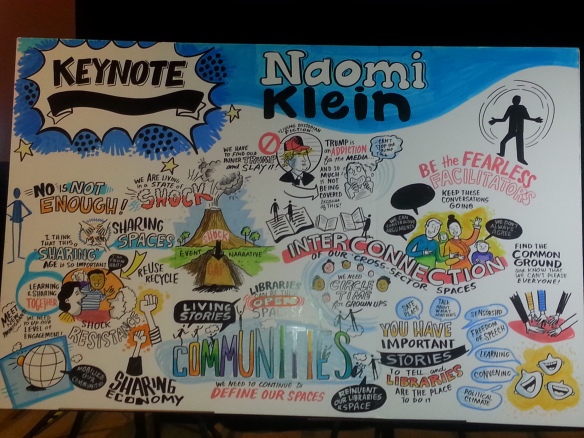 My main takeaway re the OLA Super Conference is that I should try to volunteer next year, present something, or at least register in advance. It’s an expensive conference to attend at the last minute, but I did at least have somewhere to stay for free. On the other hand, it’s difficult to plan to attend it ahead of time, because most people with jobs (especially new jobs) would find it awkward to attend something that mainly takes place on weekdays.